Materials for the direct conversion of heat to electricity

There are enormous reservoirs of energy stored on Earth at small temperature differences, including natural sources such as the temperature difference between ocean (~0°C) and ambient (-40° to -20° C for most of the year) in the arctic, and man-made sources like the waste heat from power plants and computers. The conversion of these to useable forms of energy challenges basic thermodynamic reasoning. Any such conversion device is of low efficiency, but is efficiency relevant when one is not paying for the heat? Some heat engines are highly efficient, but their ability to absorb significant amounts of heat in a reasonable period of time is limited. We present a new concept for the direct conversion of heat to electricity using phase transformations in multiferroic materials. Even though the concept involves neither significant applied stress nor significant shape change, mechanics plays the key role, as the reversibility of these phase transformations apparently rests on an issue of elastic compatibility. 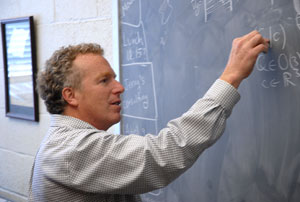 Richard D. James is Distinguished McKnight University Professor and Russell J. Penrose Professor at the University of Minnesota. He has a Sc.B. in Engineering from Brown University and a Ph.D. in Mechanical Engineering from the Johns Hopkins University. He has authored or co-authored some 100 articles, has given 35 plenary and named lectureships, and was awarded the Humboldt Senior Research Award (2006/7), the Warner T. Koiter Medal from ASME (2008), the William Prager Medal from the Society of Engineering Science, and the Brown Engineering Alumni Medal (2009). James’ current research concerns the study of “Objective Structures,” a mathematical way of looking at the structure of matter, and the direct conversion of heat to electricity using phase transformations in multiferroic materials.