The 6th annual James K. Knowles Lecture and Caltech Solid Mechanics Symposium will be held on Friday, February 13, 2015, in the Beckman Institute Auditorium. The James K. Knowles Lecture by Mary C. Boyce, Dean of Engineering, Columbia University, will be followed by the Solid Mechanics Symposium with presentations by current Caltech graduate students and postdocs.

Mechanics of Soft Composites: The Interplay between Geometrical Structuring and Large Deformation to Achieve Novel Behavior

Soft composites offer new avenues for the design and fabrication of materials and devices that exhibit novel properties and functional behavior. Engineering the interplay between the geometrical structuring of constituent materials and the large deformation behavior of the soft matrix enables structural transformations and tunable properties. Here we explore the mechanics and the design of soft composites through analytical and numerical modeling as well as through experiments on physical prototypes fabricated using multi-material 3D printing. Examples include: layered structures which exhibit deformation-induced transformation of the layered pattern leading to concomitant changes in other attributes to manipulate wave propagation and phononic band gaps; materials with alternating soft/stiff layered structures which provide protective yet flexible armor while also providing a novel material design for soft actuators which transform local compressive loading to large scale rotational motion; and soft matrices augmented by stiff particles which provide deformation-induced morphing surface topologies with engineered surface topologies with the potential to influence a wide range in surface behavior. 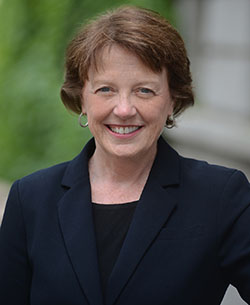 Mary C. Boyce is Dean of Engineering at The Fu Foundation School of Engineering and Applied Science at Columbia University in the City of New York and also the Morris A. and Alma Schapiro Professor of Engineering. Prior to joining Columbia, Dean Boyce served on the faculty of the Massachusetts Institute of Technology (MIT) for over 25 years, leading the Mechanical Engineering Department from 2008 to 2013. Her research focuses on materials and mechanics, particularly in the areas on multi-scale mechanics of polymers and soft composites, both those that are man-made and those formed naturally. Her leadership in the field of mechanics of materials has expanded understanding of the interplay between micro-geometry and the inherent physical behavior of a material, which has led to innovative hybrid material designs with novel properties.

Dean Boyce has been widely recognized for her scholarly contributions to the field of mechanics of materials, including election as a fellow of the American Society of Mechanical Engineers, the American Academy of Arts and Sciences, and the National Academy of Engineering. She also has been honored for her teaching at MIT, where she was named a MacVicar Faculty Fellow and received the Joseph Henry Keenan Innovation in Undergraduate Education Award. Dean Boyce earned her BS degree in engineering science and mechanics from Virginia Tech, and her MS and PhD degrees in mechanical engineering from MIT.