Mechanics of Cell-nanomaterial Interaction: Applications in Nanomedicine and Nanotoxicity

Nanomaterials, including various types of nanoparticles, nanowires, nanofibers, nanotubes, and atomically thin plates and sheets have emerged as candidates as building blocks for the next generation electronics, microchips, composites, barrier coatings, energy harvesting and conversion systems, biosensors, and nanomedicine. There is now an urgent societal need to understand the biological interactions and environmental impact of nanomaterials which are being produced and released into the environment by nearly a million tons per year, as well as to explore applications of nanomedicine to treat cancer and other diseases. This talk aims to discuss mechanics as an enabling tool in this emerging field of study. The discussions will touch on some of the recent experimental, modelling and simulation studies on cell uptake pathways of nanaomaterials with different geometrical (e.g., size, shape, orientation), mechanical (e.g., stiffness) and chemical (e.g., surface functionalization) properties of nanomaterials; cellular and Intracellular packaging of nanomaterials and cytotoxicity; and toxicity and damage mechanisms of nanomaterials to cells and membranes. 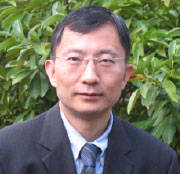 Huajian Gao received his B.S. degree from Xian Jiaotong University of China in 1982, and his M.S. and Ph.D. degrees in Engineering Science from Harvard University in 1984 and 1988, respectively. He served on the faculty of Stanford University between 1988 and 2002, where he was promoted to Associate Professor with tenure in 1994 and to Full Professor in 2000. He served as a Director at the Max Planck Institute for Metals Research between 2001 and 2006 before joining the Faculty of Brown University in 2006. At present, he is the Walter H. Annenberg Professor of Engineering at Brown.

Professor Gao’s research is focused on the understanding of basic principles that control mechanical properties and behaviors of materials in both engineering and biological systems. He has been elected to National Academy of Engineering, German National Academy of Sciences and Chinese Academy of Sciences. He is the Editor-in-Chief of Journal of the Mechanics and Physics of Solids, the leading journal of his field. He has received numerous academic honors, from a John Simon Guggenheim Fellowship in 1995 to recent honors including the Rodney Hill Prize in Solid Mechanics from the International Union of Theoretical and Applied Mechanics in 2012, Prager Medal from Society of Engineering Science in 2015, Nadai Medal from American Society of Mechanical Engineers in 2015 and Theodor von Karman Medal from American Society of Civil Engineers in 2017.