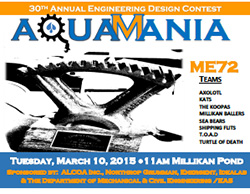 The fundamental challenge of engineering design is solving problems while meeting basic constraints. This year ME72 students formed teams to design, build, and operate, under manual and/or autonomous control, an amphibious robotic vehicle that can: